Central Clinical Hospital of the Ministry of the Interior in Warsaw 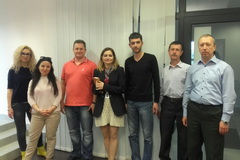 Central Clinical Hospital of the Ministry of the Interior in Warsaw

On April 29, once again, the Central Clinical Hospital of the Ministry of the Interior in Warsaw hosted Ukrainian doctors.

The visit began with an examination of the Department of Orthopedics and Traumatology, where detailed information on the treatment of complex diseases was provided on the basis of the presented pictures and descriptions of various types of injuries that have recently been encountered by Polish doctors.

In the Department of General and Vascular Surgery, Ukrainian doctors received information regarding the equipment of the department and examined the postoperative wards.

An excursion to the emergency room was conducted, and afterwards the doctors familiarized themselves with the functioning of the Polish health care system using the example of a specific clinic.

Leave a request for a consultation
right now!